This week was dense of very important events for financial markets.

The first one was the closely watched Consumer Price Inflation from the US. Inflation came out lower than expected, even if it still remains at the quite elevated level of +7.1% since one year ago (it was expected at +7.3%). 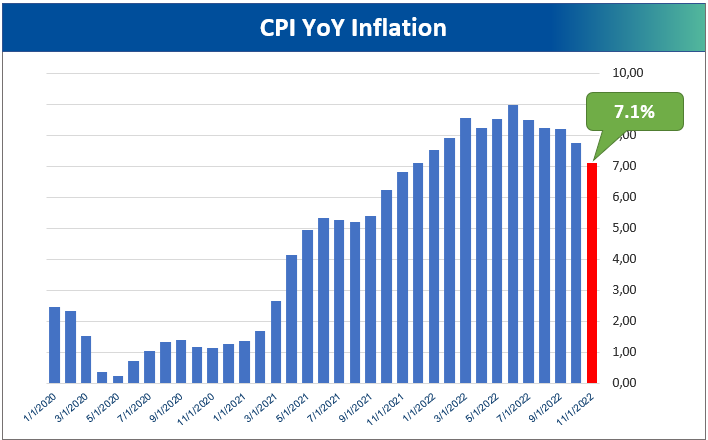 Nevetherless it was the second time in a row that prices rose less than analysts anticipated. This is undeniably a good sign.

There are clear signals that goods inflation is decelerating. Housing costs are still high but there is some evidence in the real economy that they are decelerating as well. They will be included in official CPI reading with a certain time lag.

What remains quite worrying are the so called “non-housing related services” whose prices are still pressured higher by a strong labour market.

He graph below represents the contribution to CPI of different categories of prices. As it can be seen, the energy and goods components are decreasing in importance, while most of the increase is now due to services.

Just the day after the release of the CPI, the FED was expected to decide on interest rates. As widely expected, the US central bank hiked rates by another 50 basis points. This takes the total hikes for this year to 4.25%.

What was more interesting was the stance of Powell in his conference call. It is well known by now that the FED does not want that equity markets recovers too much because that would imply a so called “loosening of financial conditions”. If the market recovers, in fact, this creates a positive “wealth effect” in the balance sheet of families that might induce more consumption.

In the present inflationary context this might push prices even higher. So Powell tries to contain the market every time that it recovers too much.

He made clear that the intention of the FED is keeping rates high as long as it is needed to slow down the labour market and the economy and contain inflation.

The terminal interest rate that board member now expect is 5.1% in 2023. In the September meeting their median forecast was 4.6%. So, they keep pushing rate expectations higher in the face of an inflation that, although improving, is still very high.

Today was then the turn of the BCE that also hiked rates by 50bp. The president Christine Lagarde sounded extremely hawkish. She said that more hikes will take place. She mentioned the possibility that we may have a few more 50 bp hikes to contain inflation that stays too high.

So the ECB looks extremely determined to hike rates even if it has to be taken into account that the European economy is weaker than the US one and that the ECB might be forced to stop hikes if the economy slows down too much. Another theme could be the fact that sensibilities within the ECB board regarding inflation and growth might become more divergent among members.

Anyway current interest rates hikes allow us to hike the expected yearly TAE in our ahorro carteras to 3.70% and 1.40%. Variable APY, what does it mean? Why stay invested when markets fall?